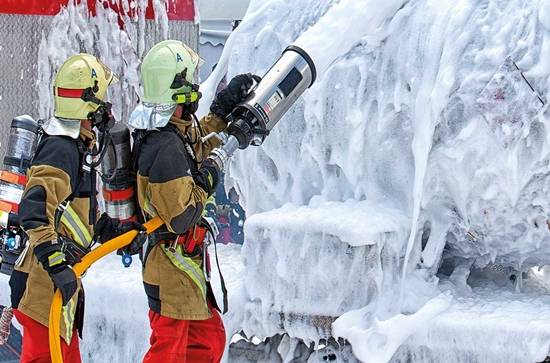 PFAS compounds such as PFOS and PFOA are deemed as emerging contaminants by the U.S. Environmental Protection Agency and can pollute the soil and water near places where they are regularly discharged. These include Air Force and Navy bases, large civilian airports, as well as nearby towns.

The fluorinated surfactants included in fire-fighting foam formulations can reach a waterway via runoff into a stream or the foam can migrate through the soil into the groundwater with the possible release to a waterway.

For more than 40 years, firefighters, especially those who have served in the U.S. military and at many U.S. airports, have used chemical-based firefighting foam, known to be potentially carcinogenic.

Occupational and Environmental Toxins Such as Those Found in AFFF Double the Risk of Non-Hodgkin's Lymphoma, Study Finds

Individuals exposed to high levels of PFAS showed twice the risk of non-Hodgkin's lymphoma compared to those with the lowest exposure.

Of particular concern, is the multi-faceted exposure firefighters - especially those connected to the United State's military or civilian airports - have to toxins directly from:

The concentrated buildup of "forever chemicals" within AFFF can result in a multitude of dangerous health risks, including some lymphoma subtypes. Lymphomas are cancers affecting the lymphatic system - which helps defend the body against infection by supplying disease-fighting cells called lymphocytes. The main types of lymphoma are:

Learning that you face serious health consequences due to your exposure to toxic firefighting foam can be difficult to comprehend. Anyone dealing with these health consequences may be entitled to compensation to help them deal with out-of-pocket health care costs.

If you, or a loved one, worked as a firefighter and have developed lymphoma, our highly skilled paralegals will advise you on your best legal options for pursuing a claim that can provide financial stability to you and your family.

Those who developed lymphoma from contaminated drinking water may have a claim against the company whose facilities spilled the chemicals which infiltrated the water supply.

At Atraxia Law, we work with clients to ensure that claims for compensation incorporate all legal entitlements. To learn if you qualify to file a claim, please call us today to arrange for your free, confidential, and no-obligation case review.