The inert ingredients in Roundup are even more toxic than glyphosate. The toxic cocktail can amplify the toxic effect on human cells increasing the risk of cancer.

The information regarding the additional ingredients of Roundup was not known to the customers then and continues to be so, even to this day.

Glyphosate, the major ingredient in Roundup, was found to interfere with amino acid production that is important for plant life only.

This explanation was provided to the EPA to gain approval for glyphosate to be sold in the U.S. However, the results of tests presented to the EPA were pertaining to glyphosate alone. When Monsanto manufactured it for the first time in the 1970s, it was launched in various formulations, Roundup being the most popular.

Roundup contained glyphosate in combination with chemicals such as surfactants and adjuvants that help glyphosate get into the cells of plants.

Though manufacturers of herbicides do not always disclose all the "other ingredients" on their labels, they will need to disclose these ingredients to the EPA. Until the year 2000, Roundup formulation included a tallow amine as a surfactant but later on, in most formulations, the surfactant properties, as well as the ratio of surfactant to the active ingredient, got changed.

The internal agency documents that were released in response to a Freedom of Information Act (FOIA) lawsuit do indicate that until last year, the agency had flaws in its data files regarding the actual formulations of Roundup that are used by consumers.

However, the formulation is being used in agricultural fields all around the world. This kind of lack of transparency on the part of Monsanto has led to a lot of confusion. In a few circumstances, it is not clear whether the research was undertaken using glyphosate alone or Roundup formulation, however, most information regarding the effects of the herbicide is based on studies conducted using the Roundup formulation. 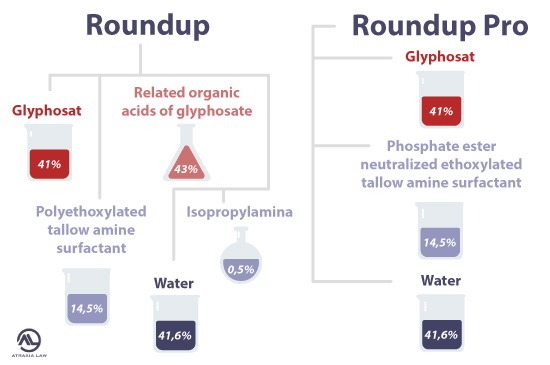 The United States Department of Agriculture, in their herbicide information profile, has noted the contents of Roundup make up glyphosate (41%), related organic acids of glyphosate (1.5%), isopropylamine (0.5%), polyethoxylated tallow amine surfactant (15.4%), and water (41.6%), and the other variant Roundup Pro contains phosphate ester neutralized ethoxylated tallow amine surfactant (14.5%) and water (44.5%) in addition to glyphosate (41%).

What Do Years of Research Say about Roundup's Ingredients? 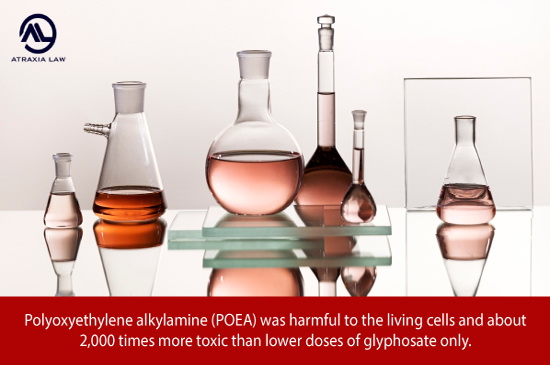 A majority of studies testing the toxicity of glyphosate have taken into account glyphosate and its toxic breakdown product, aminomethylphosphonic acid (AMPA) only, though the inert ingredients are likely to blow up the toxic effects of glyphosate.

In fact, glyphosate is not the only toxic ingredient, the inert ingredients present in the Roundup formulation have previously escaped from scrutiny as these were hidden as "trade secrets." Research has revealed that one of the inert ingredients in Roundup, polyoxyethylene alkylamine (POEA), a surfactant was harmful to the living cells and about 2,000 times more toxic than lower doses of glyphosate only. However, several regulatory bodies consider POEA as inactive and thus require no risk assessment even though research suggests otherwise.

A study conducted in 2012 concluded that inert ingredients often contribute to the toxicity of a product in a synergistic way. The adjuvants present in glyphosate-based weed killers were declared to be "active principles of human cell toxicity" thus adding to the hazard of glyphosate alone.

For the first time, the International Journal of Environmental Research and Public Health reported that the endocrine disruption was demonstrated due to the co-formulants or inert/confidential compounds also. The Institute of Science in Society (ISIS), in 2014 published that the POEA added in Roundup weed killer is most toxic to human cells and also increases the glyphosate toxic effects.

Multiple studies have presented that Roundup formulation is far more dangerous than glyphosate alone making it clear that inert ingredients in this herbicide are not as inert as they are called!

For years, environmental and health activists have been alarmed about the effects of Monsanto's Roundup on human health. There is a large body of research documenting the negative impact of Roundup weed killer on humans. In some studies, the chemicals in Roundup have been linked to the following health problems:

Recent research by the World Health Organization (WHO) established that Roundup poses significant health risks to humans. According to a study, glyphosate, the active ingredient in Roundup leads to cancer, but Roundup is a mixture of various chemicals and there is supporting evidence that this cocktail could be even more dangerous.

Multiple studies have established that Roundup is more likely to cause cell-cycle dysregulation than glyphosate. A study performed in 2009 revealed that Roundup was more toxic to human embryonic, placental, and umbilical cells.

Further, research has shown that glyphosate, the active molecule in the herbicide Roundup, acts as an endocrine disruptor, which means that it has the ability to trigger cancer, birth defects, and other developmental disorders.

Humans can be exposed to glyphosate in various ways, including eating foods on which it was sprayed or living near the area where the sprayed herbicide can drift and contaminate people's homes.

Monsanto is currently facing numerous lawsuits filed by people who have developed non-Hodgkin's lymphoma as a result of Roundup exposure.

If you have been diagnosed with non-Hodgkin's lymphoma after being exposed to Roundup either at the workplace or at home, please contact our firm to find out if you are eligible to file a roundup claim.